Summer Rainfall Averages for Every State

The map here shows how the amount of rainfall per month in summer compares across the American states. Below the map are the data it's based on.

Plus there's a ranking of states in summer from wettest to driest.

State-wide averages of monthly precipitation in summer range from a high of 7.13 inches (181 millimetres) in Florida to a low of 0.27 inches (7 millimetres) in California. For the entire United States, excluding Hawaii and Alaska, the average amount of moisture falling as rain and snow is 2.79 inches (71 millimetres).

The precipitation totals are averages for the months of June, July and August. These are based on data collected by weather stations throughout each state during the years 1971 to 2000 and made available by the NOAA National Climatic Data Center of the United States. 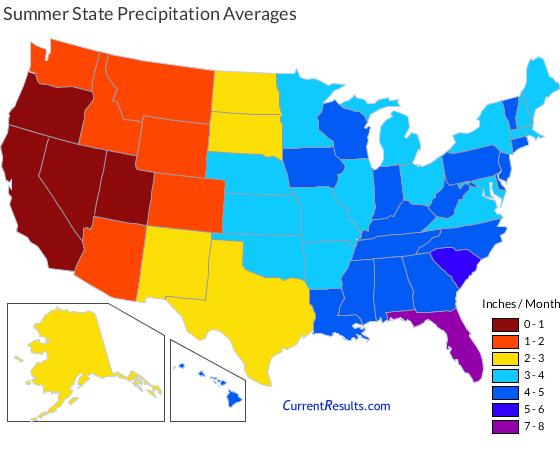 How much precipitation each state in the US gets on average in a month during summer is listed below in inches and millimeters. The states are also ranked from the wettest state in summer at number 1, to the driest state at number 50.