Europe's ten hottest cities rim the Mediterranean from Spain to Greece. Their daily high temperature averaged over a year reaches 20 to 22 degrees Celsius (68 to 72 degrees Fahrenheit). The hottest of these have lows averaging 14 or 15 °C (57 to 59 °F).

Here you'll find lists of Europe's major cities with the warmest climates overall, including rankings for the hottest five cities in Western, Northern, Eastern and Southern Europe. The ratings are based on the annual average of daily maximum temperatures.

Valletta in Malta, an island nation off the south coast of Italy, tops the list of ten hot cities in Europe. Farther east, temperatures in Athens, Greece are almost as high. While their averages are similar, when Valletta and Athens feel their heat is quite different. Valletta enjoys exceptionally warm winters, but Athens has slightly hotter summers.

Also among the hottest ten cities in Europe are Rome, Lisbon and Marseille. Though İstanbul, Turkey narrowly misses the top 10 for highest daytime temperatures, its average low of 11.8 °C (53 °F) means it has warmer nights than most southern cities.

These weather rankings are for 68 major European cities which include national capitals plus cities with a metropolitan population of over one million people. You can also see the full list of European cities and their temperatures that these ratings are based on.

Not surprisingly, all of the southern European cities have warmer weather than most cities elsewhere on the continent.

In Western Europe, France dominates the list of hottest urban areas. Also in the top five sits London, England, beating out cities in Germany, Belgium and the Netherlands.

Copenhagen is Northern Europe's warmest major city, with an average of 11.4 °C (52.5 °F). In Eastern Europe, Bucharest, Romania and Budapest, Hungary are the hot spots, and the only significant cities there with averages above 15.5 °C (60 °F). 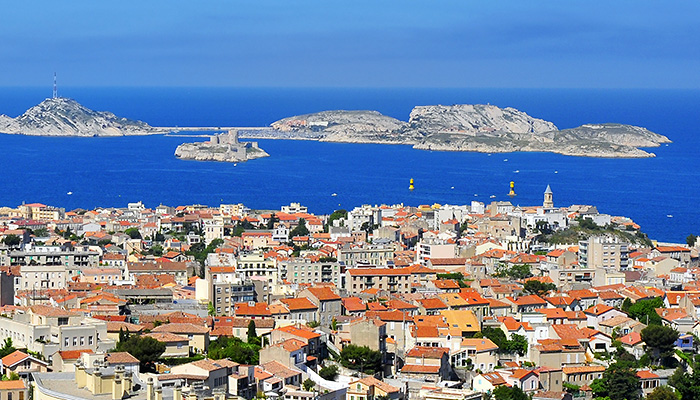 Marseille, France enjoys some of the warmest weather in Western Europe.