Here's where the beaches in southern and northern California have the hottest temperatures and warmest ocean water for summer and winter vacations.

To find the warmest beach weather in California, it's likely no surprise to anyone that you need to go to the state's southern shores.

Generally, the farther south you travel along the Pacific coast, the warmer the weather and the ocean is at any time of the year. Southern California usually offers the best beach vacation weather of anywhere along the western US coast: sunny, dry and warm.

There are a few places along California's coast, though that get surprisingly warm. Unexpected hot spots appear where the coastline juts westward. That's where the bump on the coast creates a south-facing shore that's ideal for soaking up the sun's heat.

Beaches exposed to the south become California's warmest of all in both summer and winter. These are where you're most likely to have a warm beach vacation on the Pacific Ocean.

Not every beach city and town on California's coast has a weather station. For the places that do, these usually have the warmest weather:

Warmest water – The ocean off Newport Beach and at Avalon on Santa Catalina Island typically heats up to 70 degrees F (21 °C) in August.

For those who like their beaches hot, Long Beach in July, August and September is the place to be. No other spot along the California coast with an official weather station registers average monthly temperatures above 80 degrees F (27 °C). Long Beach has highs averaging 82 degrees F in July and September, and 84 in August.

For the warmest ocean swim off the west coast of the United States, your best chances are Newport Beach in early August or at Avalon on Santa Catalina Island in mid to late August. At both places, the Pacific Ocean temperature peaks at 70 degrees F (21 °C). 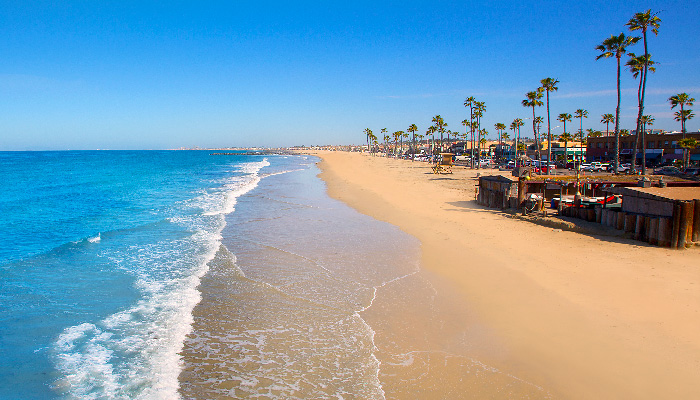 Newport Beach serves up some of the warmest water along the California coast during summer.

You can still get a warm swim in at Newport Beach anytime during the summer, though, as the water usually stays at 69 degrees F from early July to mid September and continues at 68 degrees until mid-October. The Balboa Peninsula provides shelter from the open Pacific to make Newport Beach waters the warmest in California year round.

But any beach in southern California during August has relatively warm water. Ocean temperatures of around 68 or 69 degrees can be found in August off Los Angeles, Dana Point, Oceanside, Santa Monica and La Jolla. Overall, the ocean along the state's southern coast is at least ten degrees warmer throughout the year than off northern California.

August and September are the warmest months along most of California's Pacific coast. At some beaches, temperatures peak in August, while at others September gets even hotter.

August has the highest daytime temperatures of the year at Long Beach and Santa Barbara, and on Santa Catalina and Anacapa Islands.

September days at Salinas and Point Reyes get a few degrees warmer than those in August. September is also the best month of the year for a warm ocean holiday at Imperial Beach, Oxnard, Lompoc, Pismo Beach, Salinas and Bodega Bay.

For a few places, notably Avila Beach and Morro Bay, the warmest month is October.

California's best beaches for warm winter weather are along the southern coast, particularly south-facing shores. The warmest temperatures happen at Avila Beach, Long Beach and Laguna Beach where the days get up to at least 67 degrees F (19 °C) on average in December and January.

On California's northern coast, the year's warmest weather usually arrives in September. And the warmest northern Pacific shore of all in September is at Shelter Cove where temperatures often get up above 70 degrees F (21 °C). Indeed, from May through September, days at Shelter Cove's stretch of shore average a few degrees warmer than many other northern California beaches.

Crescent City stands out among the handful of northern coastal places where the water temperature gets measured regularly, as having an unusually warm patch of ocean water. In a region where summertime waters typically run at 52 or 53 degrees F, the ocean off Crescent City sits at 58 or 59 degrees F (15 °C).