Coldest Places in the World

The Polar Plateau of the Antarctic is unquestionably the coldest place in the world. Dome A, the highest point on the East Antarctic ice sheet and the coldest spot there, has an mean annual temperature of -58.3 degrees Celsius (-72.9 degrees Fahrenheit). High-elevation research stations on the plateau also record average yearly temperatures that are below -55 °C (-67 °F).

Along the Antarctic coast, temperatures warm up considerably, with annual means above -20 °C (-4 °F). The rest of the world's coldest places are at the north end of the planet.

The second coldest place in the world also sits at the top of a massive ice cap, this time in Greenland. For the coldest places located on exposed dirt, northern Canada and eastern Siberia top the list.

Like Antarctica's Polar Plateau, Greenland has the exceptionally chilly combination of high elevations rising far from the ocean in the midst of an ice sheet.

Some other weather stations in the center of Greenland's ice cap also record mean annual temperatures below -27 °C (-16.6 °F). At lower elevations and along the coast though, annual means stay above -15°C (5 °F). 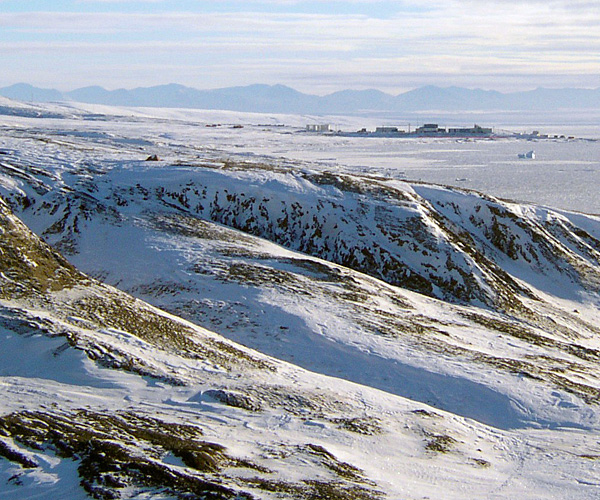 Eureka, Canada – one of the world's coldest places. Photo: NASA

Eureka sits by the ocean, part way down a long fiord that winds far into the interior of Ellesmere Island. Without an ice cap to keep conditions frigid year-round, Eureka warms up enough in summer to make its average yearly temperature comparatively mild.

Eureka's exceptionally cold winters drive its annual mean temperature down. Indeed, Eureka has the coldest winter temperatures of any coastal weather station around the Arctic's perimeter, averaging 12 °C (21.6 °F) colder than Chelyuskin and Kotelny on Russia's northernmost islands. Scientists blame the northern Rocky Mountains for influencing air circulation patterns to drag the coldest air over Canada and create a gradient of winter temperatures across the Arctic.

Summer daily mean temperatures at Alert hover just above freezing, at 1.1 °C (34 °F), several degrees lower than Eureka's. Alert's summers are possibly the coldest anywhere outside of Greenland and Antarctica, giving Alert a respectably low annual average of -18.0 °C (-0.4 °F), and placing it among the coldest places in the world.

Even Eureka's winters can't compete with those in eastern Siberia, which has the coldest northern winters outside of Greenland. Mountain ranges block central parts of eastern Siberia from ocean air that can moderate temperatures. The region's winters have long nights, clear weather and calm winds, conditions that allow heat to radiate from the ground and escape into the atmosphere.

Oymyakon is a village of several hundred people, located in a wide valley, below a plateau surrounded by mountains. The topography causes cold air to sink into the valley bottom where it accumulates.

On an annual basis though, Oymyakon is definitely balmier than Eureka. Because Oymyakon lies considerably farther south, it enjoys warmer summers than the Canadian outpost. As a result, Oymyakon's annual average temperature is -16.0 °C (3.2 °F), several degrees above Eureka's.

More on the World's Coldest Places