Antarctica is the world's coldest continent, and the coldest region of that frigid landscape is the expansive Polar Plateau. The plateau stretches across the center of the world's largest ice sheet.

Ice on the Polar Plateau is often three kilometres (1.8 miles) or more thick, making the plateau rise well over 3,000 metres or 10,000 feet in elevation. The high elevation contributes to the plateau's extremely cold year-round weather.

Although the plateau extends to the South Pole, that isn't the coldest place on earth. The mean annual temperature there is a relatively balmy -49.5 degrees Celsius (-57.1 degrees Fahrenheit). The South Pole sits at an elevation of 2,835 metres (9,300 feet), but the plateau rises much higher than that, where it gets several degrees colder.

During the last few decades, research stations scattered about the plateau at elevations of 3,420 to 3,625 metres (11,220 to 11,893 feet) have reported remarkably low temperatures throughout the year, confirming that the East Antarctic Polar Plateau is the planet's coldest area. 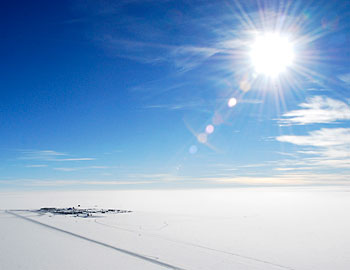 One exceptionally cold spot on the ice sheet is Vostok, sitting about 1,300 kilometres (808 miles) from the South Pole. Vostok's mean annual temperature for 1961 to 1990 was -55.4 °C (-67.7 °F). That's not the lowest average yearly temperature on the plateau, yet the site has set the world record for the lowest temperature twice.

But none of those places are the coldest in the world. The East Antarctic ice sheet rises several hundred metres above the research stations. Scientists figured they needed to climb higher up the plateau to find the coldest place on earth.

It wasn't until 2005 that scientists reached Dome Argus, better known as Dome A — the highest point on the East Antarctic ice sheet — and started recording temperatures.

The Dome A summit is located at a latitude of 80 degrees South and rises to 4,092 metres (13,425 feet) above sea level. Measurements made in 2005 revealed that Dome A has an annual mean temperature of -58.3 °C (-72.9 °F), confirming it indeed is the coldest place on earth. Researchers have designated Dome A as the earth's "pole of cold".

More About the Earth's Coldest Places