History of Changes in the Earth's Temperature

How Hot Has the World Got?

That change is in the mean global temperature that has been calculated for each year since 1880. The history of average global temperature is based on data gathered around the world at weather stations, on ships and by satellites.

Despite the overall increase, global temperatures have not climbed steadily during the decades. The average global annual temperature hovered around 13.7 °C (56.7 °F) from the 1880s through the 1910s.

Some Places Are Warming Faster

The global temperature values come from data collected around the world that were rolled together to calculate an average for the entire planet. What the global numbers don't show is that temperatures have changed at different rates in different parts of the world. On a large scale, the amount of change depends upon whether a site is located on land or at sea, in the northern or southern hemisphere, and at a pole or the equator.

Air over land has historically warmed faster than the oceans. With water covering over 70% of the planet, sea surface temperatures dominate the global average. 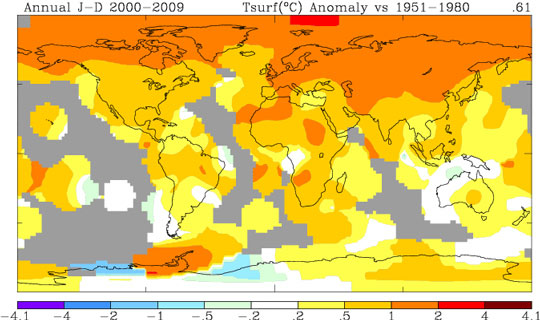 About the Temperature Data

The temperature data are provided publicly by NASA's Goddard Institute for Space Studies (GISS), based in New York City. GISS has compiled and analyzed data from a thousand weather stations around the world, ship and satellite observations of sea temperatures, and measurements at Antarctic research stations to form a global temperature index. The annual averages go back in history only to 1880, when meteorologists began using modern scientific instruments to monitor temperatures precisely.